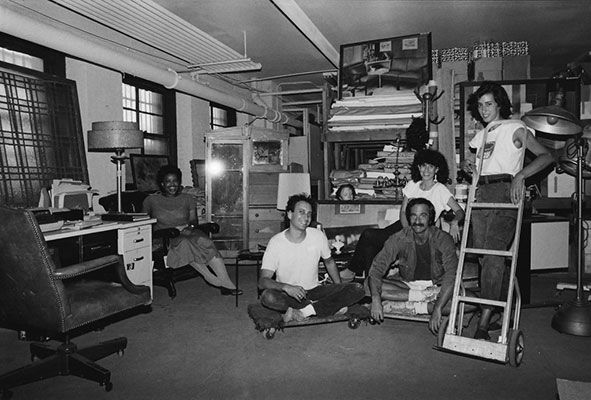 BY 1989, Glass and Moser had scoured the five boroughs for an appropriate and affordable space. In 1990, MFTA bid farewell to the crowded basement at PS1 and moved to a 10,000-square-foot space in what is now the Chelsea Market in Manhattan.

Glass, a natural connector, traveled the country promoting MFTA on the arts and environmental circuits. She gained increased support from state and federal agencies. The funds they donated she used to expand staff and secure additional vehicles to manage the growing volume of donations. She received funding from the U.S. Environmental Protection Agency (EPA) to update and reprint the step-by-step guide, “Starting a Materials Donation Program,” which explained how municipalities could implement the MFTA program. Ironically, this was the original project that Glass had reviewed when she was at the NEA.

In 1990, Tim Doyle joined MFTA as Deputy Director. Thanks to private funding, Doyle oversaw the creation of MFTA’s first online database to track material donations. This major step allowed MFTA to move seamlessly into the new era of computers and advanced technology.

Glass, Doyle, a shifting team of drivers, warehouse helpers, and office support continued to add recipients to the roster, which began to include social and community service organization with arts programming. Simultaneously, public school teachers were clamoring to get in.